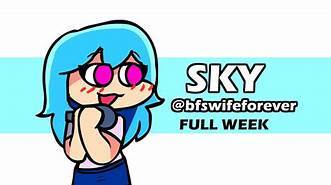 "IT WORKED!!! THE SHIFT WORKED!!!"
Advertisement:

is a discontinued Game Mod for Friday Night Funkin' developed by bbpanzu (notable for also creating VS Carol and VS Sunday), consisting of a week's worth of songs featuring the character of the same name created by the "bfswifeforever" TikTok parody account.

When an obsessed Yandere projects herself into the world of Friday Night Funkin' to take Boyfriend for herself, it's up to him and Girlfriend to write up a much-needed reality check.

The mod has since been deleted off of GameBanana, the place where it was originally posted, and is not being reuploaded. The only way you can check out the mod for yourself is either through finding mirrored copies of the game on other websites, or through gameplay videos on YouTube. There are also fanmade mods with their own spin on the game.