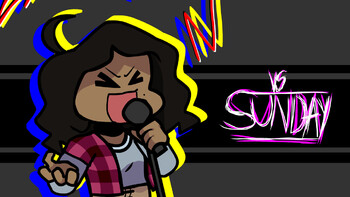 Don't be fooled; they may be a Sleepy Head but they can do a Metal Scream.* or two!
"So my band is performing tonight and my co-vocalist broke their pelvis and we need a replacement. Was kinda hoping you could replace them?"
—Sunday, opening cutscene
Advertisement:

After a day of golfing, Girlfriend, Carol and Boyfriend arrive at Carol's house, the former two going off to watch Hamilton while Boyfriend is told to get comfy. Not bothering to look before sitting, he accidentally sits on Carol's housemate, a sleepy Latino rockstar called Sunday, who then realizes Boyfriend is, well, Girlfriend's Boyfriend.

Sunday asks Boyfriend for a favor - their band is performing tonight, but Sunday's co-vocalist broke their pelvis and now the band needs a new one. Boyfriend accepts, but he better be ready for a loud metal showdown!