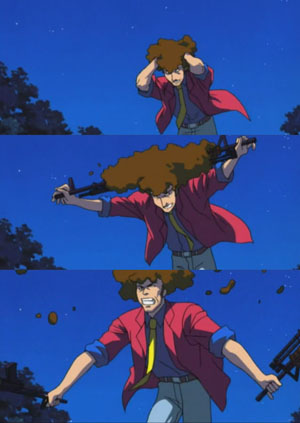 This is an old gag. It's where someone seems to have a storage space set in their hair. Usually, that hairstyle is an afro if it's a man or a beehive if it's a woman, but not always. Why are they capable of doing this? Because they have Hammerspace Hair!

A minor variation is when a character keeps things stored in his beard. Can also be invoked if a character's entire body is covered with hair.

For times when it seems like someone's hair must have been hidden in hammerspace, see Compressed Hair. This is actually a real technique some people employ in street fights, so employing this tactic can make one a Combat Pragmatist.

Where else is Pinkie Pie supposed to store her bucket of pudding?

Where else is Pinkie Pie supposed to store her bucket of pudding?