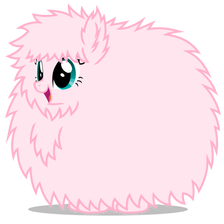 is a Ask a Pony Blog. It all began on one of the author's other blogs—Dan Vs. FiM—wherein Dan was asked a simple question: "Fluffy ponies?" The soft pink puffball of a pony originally appeared to torment Dan for a one-off gag, but she quickly took on a life of her own, enough to merit her own blog. One that quickly overtook the original blog in popularity.

The titular Fluffle Puff is a strange pony, under the care of Twilight Sparkle (and Dan) who just so happens to be completely covered in thick pink fur. She never speaks (though she blows raspberries and occasionally squeaks everywhere) and seems to have a childlike view of the world around her, but she also happens to have an intense and endless love of the world around her. How bottomless is her love? So much so that Queen Chrysalis moves in with Twilight in order to drink up all of Fluffle's love. Combined with her sheer adorableness, Fluffle Puff actually manages to tame the fearsome Changeling Queen, and now she lives (mostly) peacefully with Twilight at the Golden Oak Library. Well, except for all the antics Fluffle Puff and her get up to. And given that Fluffle's innocence is such that it borders on warping reality, maybe it's a good thing there's someone as powerful as the Changeling Queen around to keep her in check...

in April 2018, it was announced that the Fluffle Puff blog would be ending. However, the author has said that Fluffle Puff will be continuing, albeit as an original OC, rather than as a My Little Pony OC, with Chryssi and Marksaline getting deeper reworks as well. The new blog, Floof 'n' Friends can be found here

This blog provides examples of: