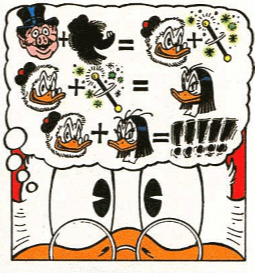 Uncle Scrooge gives us all a lesson in Elementary Villain Arithmetic.
Advertisement:

When you want to show the keen, obsidian-sharp mind of characters at work, or lay out their cunning and complex plans out in a Comic Book, Web Comic or similar media, the best way to do it is with a Rebus Bubble. Simply show (Person 1) + (Item/Event/Person 2) = Result. For Result, expect an Idea Bulb, Stuff Blowing Up, Hilarity Ensues, or a gravestone.

People more practiced in these mental mathematics can also subtract, multiply, divide, and do other awesome algebraic equations in the Rebus Bubbles to show more complex thoughts.

It's not rare for a given comic to replace all text in Speech Bubbles with Rebus Bubbles for especially funny non-verbal exchanges.

, which is where a word or phrase is represented by images of objects, whose names are homophones (they're a central part of the game show Concentration)... Which, in turn, should not be confused with Rebis. It should also not be confused with Speaking in Panels, which shows a story in a bubble. And certainly not with a hard-bitten Scottish policeman.

A type of a Pictorial Speech Bubble. Exposition Diagram is often used much the same way. See Formula for the Unformulable when a character attempts to solve a non-scientific problem with maths and science. For this concept applied to tropes, see Troperithmetic.

Doggie Daddy has trouble grasping the concept of not having his daughter with him.

Doggie Daddy has trouble grasping the concept of not having his daughter with him.