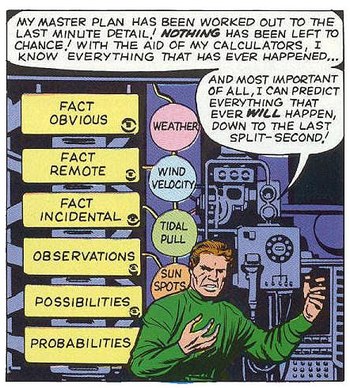 And he would have gotten away with it, too, if it weren't for those meddling Fantastic Four!
"If you look closely enough at the present you can find loose bits of the future just lying around."
— Petey

So, how does one predict what's about to happen when there's no Psychic Powers in the setting? With probability and statistics, that's how. From the results of the next sports game to the fate of the human race, anything can be predicted, as long as we have all the background data and include it in the right equations. You don't think so? Then behold The Big Board! Or even the Room Full of Crazy! There are all the equations! Oh, sure they look like gibberish for the untrained eye, but the math is there. The future can be predicted with 100% accuracy, except for that little detail we did not consider, and which ruined the whole equation.

Can involve Sherlock Scan or Awesomeness by Analysis. Sometimes used for a Precrime Arrest. Contrast Butterfly of Doom.

open/close all folders
Anime and Manga
Comic Books
Fan Works
Advertisement:
Films — Live-Action
Literature
Live-Action TV
Tabletop Games
Video Games
Web Comics
Web Original
Western Animation
Real Life
It is of course impossible to do this with perfect accuracy thanks in large part to chaos theory, but a great amount of effort is spent in real life trying to ascertain what is probable to occur, especially when the stakes are high.