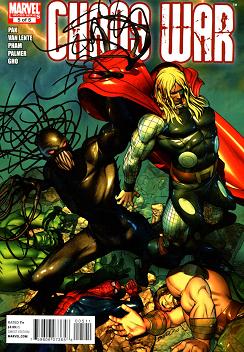 After The Incredible Hercules and a couple of miniseries featuring Amadeus Cho ran its course, the plot threads left hanging were finally resolved in this Crossover event.

The Japanese evil god Amatsu-Mikaboshi, who got a hold on many enslaved alien gods during Secret Invasion, goes on a rampage across the universe intending to destroy the entire creation and return everything to primordial chaos. Unlike Annihilus however, he takes out gods and other supernatural entities first. Hercules, who has just come back from his supposed death with a significant power boost, assembles a team of gods and close enough individuals to combat the king of chaos.