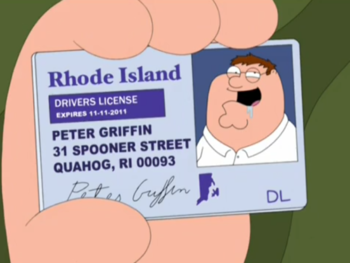 Best. License. Ever.
"To enter Europe, you must have a valid passport with a photograph of yourself in which you look like you are being booked on charges of soliciting sheep."
— Dave Barry's Only Travel Guide You'll Ever Need
Advertisement:

A character's identity card has an ugly, badly shot, misframed, mistimed, or otherwise unflattering picture of them. This is a popular sight gag, most commonly associated with passports, school IDs, or driver's licenses — although even a library card can count, as long as there's a photo on it. If they've had the card long enough, it tends to become an Embarrassing Old Photo; an occasional twist on the joke is to have the photo showing somebody completely different, implying that either the character has changed a lot or the picture is just that bad.

In some cases, the actual taking of the bad photo is part of the story. This may extend to school picture days as well, if the day in question is actually shown.

Truth in Television to some extent, people may change their hairstyle or shave off their beard that they once thought looked cool, but upon reflection was a bad style choice. This trope is actually enforced to some extent as most ID vendors (like a passport office) have rules for getting your picture taken, meaning you're not allowed to smile, which can lead to eerie, untrustworthy-looking mugshots of someone.

Amy is not impressed with the photo in her passport.

Amy is not impressed with the photo in her passport.