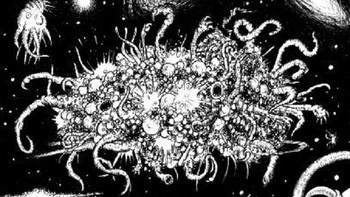 This character is a deity, Cosmic Entity or Anthropomorphic Personification in the setting that represents chaos in some form. What that chaos is meant to represent varies; randomness, entropy, destruction and being unpredictable are common traits of the god of chaos. Discord and anarchy are common attributes as well.

Their morality varies. Many gods of chaos are outright evil, and fall under the God of Evil label. Maybe they have a morality incomprehensible to mortal beings, assuming they aren't just insane or completely mindless, that is. They are usually an Eldritch Abomination as well, who are often associated with chaos and disorder anyway. Sometimes they are a more neutral Trickster God or Great Gazoo, though few can be called outright good. If they have a goal outside of amusement or promoting chaos, it's either opposing order or trying to bring about a World of Chaos. If Religion Is Magic, those who worship the God of Chaos would use Entropy and Chaos Magic. Don't expect anyone to mention that having a god to manage chaos makes it less chaotic.

Usually depicted either in opposition to the other gods or The Friend Nobody Likes. If there's a Top God, the God of Chaos is often either The Anti-God or the setting's Satanic Archetype. If the Primordial Chaos appears, the god of chaos might represent or be it. For these entities' opposite numbers, see God of Order.

Aesir, God of Chaos and the creator of Earth and Purgatorio

Aesir, God of Chaos and the creator of Earth and Purgatorio