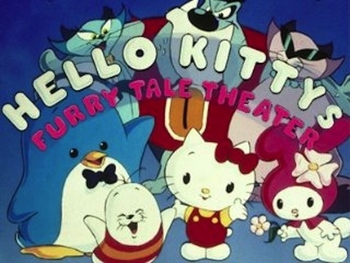 Presented in a two shorts format, Hello Kitty and her friends run a playhouse that performs quirky retellings of classic fairy talesnote Pinocchio, Sleeping Beauty, storybooksnote How the Grinch Stole Christmas!, Knights of the Round Table, and even various films.note The Original Star Wars trilogy, Jaws, King Kong as shows within a show.

This is the only Hello Kitty animated series that is an International Coproduction intended for a non-Japanese market, originally airing on CBS in the United States; the animation was produced in Japan (by Toei Animation, with assistance from Korean studio Big Star) but all scripts and voice acting are in English. Three later anime series, Sanrio Anime Festival, Hello Kitty and Friends and Hello Kitty's Animation Theater, also plug her and other Sanrio characters into fairy tale retellings, though those adaptations are much more straightforward and faithful (especially Animation Theater) and lack a Framing Device.

U.S. viewers can watch the whole series on digital retailers. VUDUnote Pronounced like "voodoo". is also streaming the show for free in the U.S. (until 2019)