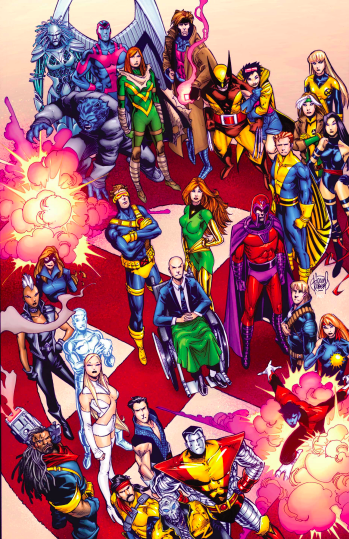 The Strangest Superheroes of them all. The Uncanny Misfits. The Heroic Outcasts.

The X-Men are a Super Team in the Marvel Universe created by writer Stan Lee and artist Jack Kirby and first appeared in The X-Men #1 (September 1963).

The team are members of a human subspecies, Homo superiornote otherwise known as Homo sapiens superior, colloquially referred to as "mutants". Mutants are humans who possess the "X-gene", a gene that gives them special superpowers and unique capabilities. Said to be humanity's next evolutionary phase, their presence has incited massive dissension as humans believe they will soon become extinct. While most strive for a civil coexistence, mutants are generally met with fear, hatred, violence, envy, and discrimination. Under increasing anti-mutant sentiment, mutant telepath Charles Xavier creates a haven at his Westchester mansion to train young mutants to use their powers for the benefit of humanity as well as to prove mutants can be heroes. Initially, he recruited Cyclops, Iceman, Angel, Beast and Jean Grey, calling them "X-Men" as they had power from the X-gene. Early issues introduced the team's archenemy Magneto and his Brotherhood of Evil Mutants, who fight for total mutant supremacy and would battle the X-Men for years – the Brotherhood also introduced the twins Quicksilver and Scarlet Witch, who would reform and became Avengers. While the early issues focused on typical good versus evil/law versus crime stories, they did feature an undertone (which, depending on the issue, would become more overt) of racism and prejudice as a central theme.

The original run of X-Men stories stopped with issue #66 (March 1970), after which Marvel turned the title over to publishing reprints of older stories... until the X-Men underwent a significant Retool for The Bronze Age of Comic Books with Giant-Size X-Men #1 (May 1975), by writer Len Wein and artist Dave Cockrum, which brought in an almost entirely new team of main characters including iconic fan-favorites Wolverine and Storm, retaining only Cyclops and Professor X. Although the original team was composed entirely of WASPs, as was typical of the time, the All-New All-Different team of 1975 was incredibly diverse (and for the most part averting Captain Ethnic), and subsequent team makeups have kept this aspect. Since its debut, the comic has been a major allegory of civil rights, specifically the American Civil Rights Movement and, more recently, the LGBTQ Rights Movement.

With Chris Claremont taking over as writer – at first alongside Cockrum, and subsequently with John Byrne as artist and co-plotter – X-Men (later renamed to Uncanny X-Men) ascended to become the most popular comic book franchise published by Marvel, a position it would maintain through the '80s and '90s. During Claremont's extremely long run from 1975 to 1991 alongside a succession of talented artists, the team continued to evolve over time: characters would join, leave and occasionally return to the team, resulting in the massive ensemble cast that the X-Men franchise is known for today.

The number of X-Men books has expanded enormously over time, including new team books, spinoff teams and character-centric solo books, many of which have their own pages here on TV Tropes. Spin-offs first began appearing in the '80s – Claremont and X-Men editor Louise Simonson were against the idea, wanting the X-Men to remain unique and special, but were informed that spin-offs would be created regardless of their involvement. Thus in 1982 they developed New Mutants, a companion title starring a team of teenage mutants also being trained at the Xavier School. In 1986 the series X-Factor was created, reuniting the original five X-Men in their own title; 1988 saw various ex-X-Men spun off into Excalibur, and the launch of the solo Wolverine comic. Various X-Men characters would also star in their own solo miniseries, from the early '80s through to the present day.

Coinciding with Claremont's departure, a second main X-Men series was launched in 1991, simply titled X-Men (nicknamed “Adjectiveless X-Men"). Ever since, having multiple main X-Men titles has been more common than not – the degree to which the titles are interlinked has varied over time, usually more so when they have the same writer (such as in the mid-'90s when Uncanny writer Scott Lobdell took over writing X-Men as well). It has also varied whether the main X-Men titles are considered equally important or if there is a “flagship title”, such as Grant Morrison's New X-Men over 2001-04 or Jeff Lemire's Extraordinary X-Men over 2016-17.

Meanwhile, new generations of teenage mutants have also been introduced to the extended X-Men cast over time. After the now-adult New Mutants were relaunched as the Darker and Edgier X-Force, a new generation of teens was introduced in 1994 with Generation X. In 2002 another younger generation was first introduced in a new volume of New Mutants and would go on to star in New X-Men: Academy X. As each generation grows to adulthood – at varying rates, given Comic-Book Time – their characters have joined the X-Men and other teams, or starred in revivals of their original series, or both.

The idea of a sovereign mutant nation has come up several times over the course of the comics, such as when Magneto conquered the country of Genosha in the '90s and when the X-Men founded the short-lived nation Utopia in the late '00s. It is the premise of the most recent relaunch of the X-Men line from 2019 under the creative control of Jonathan Hickman, which is based around the establishment of a mutant nation on the living island of Krakoa from Giant-Size X-Men #1.

The X-Men comics have been adapted in other media, including animated television series, video games, and a rather successful series of films.

Here are the different incarnations of the X-Men so far:

The X-Men comics provide examples of the following tropes: