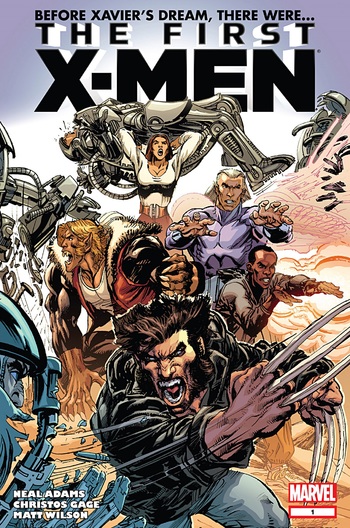 "It's hard to turn down a friend asking for a favor. Which is why I make it a point to never have friends. But sometimes it can't be helped. Old war buddy asked me to find his son. Kid ran off. Most people thought drugs, but he knew different. Things have been going on with the kid lately. Your kind of things is how he put it. I'm a private guy, but spend enough time around me in combat, and you'll see i'm not your typical grunt. He thinks his son might be like me. Different, and he needs help. If he's anything like me, he sure does."
—Wolverine
Advertisement:

First X-Men is a 5 issue mini series that tells the story of Wolverine & Sabretooth starting the concept of X-Men, trying to liberate & train young mutants who are being hunted and murdered by the government.

Follow the most unlikely two founders on the journey to save these young mutants, help them control their powers, and crusade to give every mutant like them a place to belong that they have never had. The very first recruit is Holly Bright, a young mutant with the power of illusion. She has more than a big effect on Sabretooth, which helps him discover a goal of his own that he never thought possible before.

Published in October 2012, the series was written, penciled, and inked by veteran, Neil Adams with Christos N. Gage as co-writer.