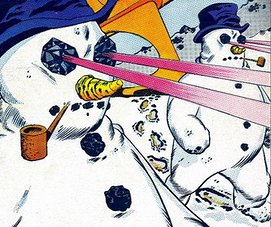 The Magic Snowman. On Crack.
"By the power invested in me by the mighty and awful snow demons, I command you to come to life! LIVE! LIVE! LIVVVE!"
— Calvin, Calvin and Hobbesnote He gets what he wants alright.
Advertisement:

Snowlems (a portmanteau of Snow Golems) are living snowmen, often complete with stovepipe hats, lumps of coal for eyes, and carrots for noses - or, in Japanese works, an upturned bucket worn as a hat. Genre writers with a sense of humor may cast them as Ice Elementals. There are three varieties of Snowlems:

Version I. The Friendly Snowlem: Also known as the "Frosty the Snowman" variety, they often are simply snowmen constructed by cute kids and animated by Christmas magic. Olaf from Frozen, basically.

Version II. The Human Snowlem: This is where a human is transformed into a snowman, sometimes after an accident or due to some Applied Phlebotinum. Depending on who the person is, it may overlap with Versions I or III.

Version III: The Deranged Mutant Killer Monster Snowlem: The snowman is something to be feared. Perhaps it's some supernatural monstrosity shaped into a snowman or perhaps a serial killer back to life or maybe it was simply evil snow, it doesn't matter. The only thing that matters is... oh my god, he just killed that guy with a carrot!

Snowlems sometimes get into Snowball Fights, which to them, must be some kind of Body Horror nightmare.