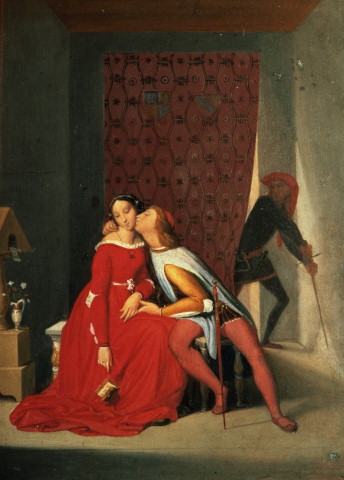 Pay no attention to that man behind the curtain.
"Well I'd rather see you dead, little girl
Than to be with another man"
— Arthur Gunter, "Baby Let's Play House"; later quoted in The Beatles' "Run For Your Life"
Advertisement:

Naturally, this is often handled differently than the Clingy Jealous Girl. An irrationally jealous female partner is often used as an element of comedy, treated as "normal" or more inherently justified or sympathetic behavior for a woman, whereas the irrationally jealous male partner is more likely to be treated as if he has a serious flaw: he's portrayed less sympathetically, criticized more harshly by fans, less frequently played for comedy, and has a higher tendency to either rape the girl he's in love with or Murder the Hypotenuse, rather than drag the object of their affections away by the ear or pummel them into space with a Hyperspace Mallet. Interestingly, though, at the far end of jealous insanity, the Yandere is far more often female.

However, a guy obviously acting paranoid in a situation where there's no reason for him to be jealous, especially as a Running Gag, makes for comedic gold. As long as the comedy comes from making the guy look like a fool and not from making his partner suffer, it's okay (though the latter being funny isn't statistically impossible).

Of course, all bets are off when this trope is mixed with the Boys' Love or Ho Yay, which is certainly not all that rare; in fact, the biggest Played for Laughs examples tend to come from this field.

May double as a Stalker with a Crush or Prince Charming Wannabe. Compare Friend Versus Lover for another strained triangular constellation.