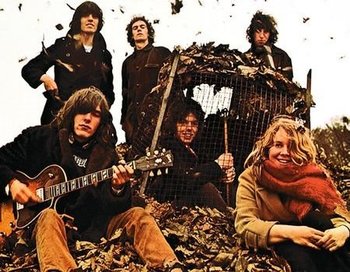 We used to say that come the day,
We'd all be making songs,
Or finding better words,
These ideas never lasted long.
"Meet on the Ledge"
Advertisement:

Fairport Convention is a British band formed in 1967. They are generally regarded as progenitors of the English Folk-Rock scene of the 1970s. They enjoyed popular success in the late 1960s and early 1970s with DJ John Peel championing them on radio. They were considered as important to British folk-rock as The Byrds were to American folk-rock. After many line-up changes they continue to attract a modest but devoted following, especially to the annual Fairport's Cropredy Festival near Banbury in Oxfordshire.

The band began when guitarist Simon Nicol and bassist Ashley "Tyger" Hutchings were playing together in the Electric Shuffle Orchestra. They formed their own band along with guitarist/songwriter Richard Thompson and drummer Sean Frater, which convened for rehearsals at Nicol's family home, Fairport, in Muswell Hill, North London. At first they set out to emulate American West Coast folk-rock bands like Jefferson Airplane, playing covers of songs by Bob Dylan, Joni Mitchell and The Byrds along with their own compositions. Frater left soon after the first gig at St Michael's Church Hall in Golders Green, to be replaced by Martin Lamble. Two singers, Judy Dyble and Iain Matthews, were taken on and the distinctive sound began to attract wider attention. An album, Fairport Convention, soon followed but sold poorly. They then hooked up with Island Records and producer Joe Boyd, replaced Dyble with folk singer Sandy Denny, and what followed in the space of a single year (1969) was their three best-known albums that took the band on a remarkable journey from capable cover artists to seminal folk rock, even as tragedy in the form of a road accident that killed Martin Lamble and injured other band members caused personnel changes and musical differences that led to disintegration.

As band members left to pursue their own directions Fairport Convention went through many lineup changes. The band that made the 1973 album Rosie had no members in common with those that made 1969's Unhalfbricking. By the late 1970s Britain had lost its appetite for folk-rock; few were buying their records and they were reduced to a small cult following only around the folk club scene. Poor sales led to the end of their recording contract and the band formally broke up, agreeing to meet for a reunion once a year in Cropredy, the home of bass player Dave Pegg who by then was the Face of the Band. In 1985, with the growing success of the Cropredy Festival and the return of Simon Nicol, they reformed and have enjoyed modest success and a devoted following with a stable lineup to the present day.