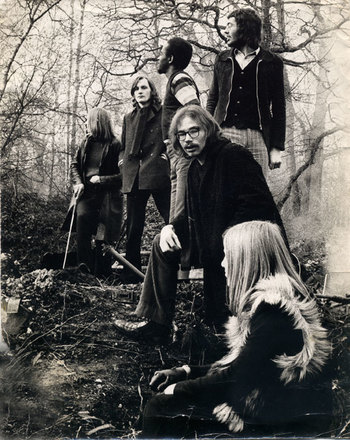 The first incarnation of Comus
"Rise up Comus, sing your song
Bewitch the maiden, the day is long..."
— "Song to Comus" - First Utterance
Advertisement:

What happens when a bunch of art geeks take too much acid and decide to start a folk band? Well, look no further.

Comus (named after John Milton's famous masque, Comus) is an English progressive folk band, which existed in 1969 - 1972, made a brief reemergence in 1974, and was thought to be dead until 2008, in which the band reunited.

Frontman Roger Wootton and friend Glenn Goring formed the first incarnation of the band in 1969 by playing folk songs around Kent, England. The group quickly expanded to a six piece ensemble, which counted David Bowie among its fans. In 1971, they recorded their cult classic First Utterance, which the band personally dislikes due to it failing to capture the energy of their performances. First Utterance is known for its dark atmosphere, with lyrics ranging from murder to mental institutions. They attempted to create a followup, but the band had a falling out and broke up.

In 1974, Wootton reorganized whatever remaining members of the band he could find to create the much poppier To Keep From Crying. Everyone involved considers it a massive failure on every level, and Wootton refuses to play any of the songs live (except for "Down Like A Movie Star", which he considers a personal favorite).

After three decades of inactivity, fans were pretty certain the project was dead. That is, until 2008, where Comus made a surprise comeback and released a new studio album, Out of the Coma, as well as several live albums from their new tours.