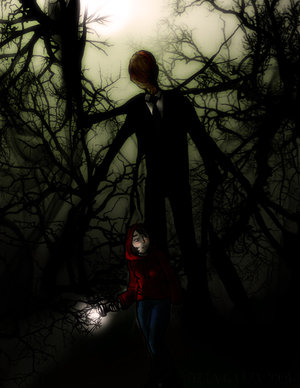 . Used with permission.
"But human flesh was too frail, too paltry to hold the terrific essence that was Khosatral Khel. So he stood up in the shape and aspect of a man, but his flesh was not flesh; nor the bone, bone; nor blood, blood. He became a blasphemy against all nature, for he caused to live and think and act a basic substance that before had never known the pulse and stir of animate being."
— Robert E. Howard, The Devil in Iron
Advertisement:

Every once in a while, twisted things from beyond the fringes of humanity's consciousness will show up in forms that for all intents and purposes look like good old H. sapiens.

Though its appearance is sometimes passable as human, it is still clearly... not quite. In a few cases they actually were human until they went beyond the pale, but most likely, what you're seeing is actually a disguise or misperception for something you're really better off not seeing, or even the progeny or creation of something even worse. Even those that are very clever in human terms will have difficulty not setting off instinctive alarms in the human subconscious. Less subtle abominations will do their job too well and seem impossibly beautiful, while the even less subtle will distort their human form with twisted limbs or malformed features or other such monstrosities.

Despite its appearance, they will very likely also not think in terms human reason can readily grasp, and will often lack anything resembling a recognizable or conventional moral code. At best, they will be comparable to The Fair Folk (and indeed, many of The Fair Folk qualify as this trope — which is to be expected, since "eldritch" originally meant "elven"). Nor will they conform to the expected laws of nature — or magic, in such settings — so expect Lovecraftian Superpowers and other unspeakable traits.

Subtrope of Eldritch Abomination, and sister trope of Animalistic Abomination and Cthulhumanoid. Compare and contrast Monstrous Humanoid, where the creature can only be inhuman in that it has some clear and defined monstrous aspect, while remaining a humanoid. See Transhuman Abomination for a possible justification. Not to be confused with Humans Are Cthulhu. See also A Form You Are Comfortable With, though many humanoid abominations have an appearance that humans can't easily be comfortable with, and such appearances may or may not have been chosen by the Eldritch Abomination for that purpose.