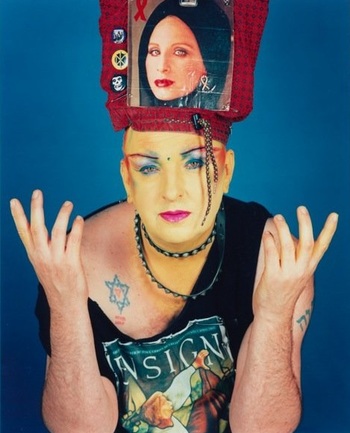 Wilum Hopfrog Pugmire (May 3, 1951 – March 26, 2019), a.k.a. the "Queen of Eldritch Horror," was a modern Cthulhu Mythos author of prose poems, short stories, and novellas, known for his original setting of Sesqua Valley and its unusual inhabitants who were born from the mountain mist. He was widely considered one of the most important Lovecraftians working today and had won praise from Thomas Ligotti, S.T. Joshi, and Laird Barron. Pugmire sadly passed away in early 2019.

Pugmire had been described as a "strange and beautiful person"[1]

, which is certainly reflected in his eerie, haunting prose, evocative moods, and dark themes. It is often said that his work is not for everyone, although many readers will be richly rewarded.

Several pieces of his are available online, mostly at the Lovecraft eZine

. More information can be found here

Tropes found in Pugmire's works include: