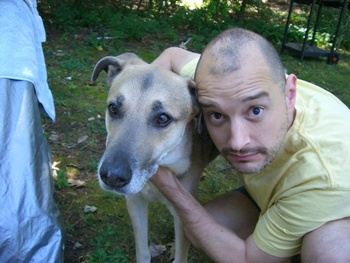 Mark and the late, great Henry the Dog
Advertisement:

Mark Prindle is a music reviewer from New York, focusing on all types of rock music. Being active since 1996, his homepage

, is one of the oldest and most influential record reviewing sites on the web, having inspired many others to write about music, such as George Starostin.

Unlike most rock journalists, he doesn't limit himself to talk solely about the album in question - Prindle adds curious anecdotes, random jokes, and lots of profanity (this is mostly done for the sake of humour). It should also be noted that he's not afraid of saying what he thinks about any artists, which often results in negative reviews given to universally praised musicians (like Velvet Underground and Miles Davis, for example).

His favourite artists include The Ramones, the Cows, The Fall, Pink Floyd, The Pixies, AC/DC, and many others.

On December 27, 2011 he announced that he has retired from reviewing, as he feels that he has completely moved on with his life. Godspeed you, Mr. Prindle.