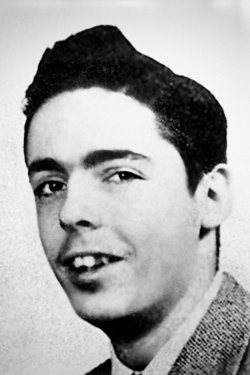 One of the few pictures of Pynchon's face. Here from his college yearbook.
"Here's your quote: 'Thomas Pynchon loved this book, almost as much as he loves cameras!' (waving at passing cars) Hey, over here! Have your picture taken with a reclusive author! Today only, we'll throw in a free autograph! But wait, there's more!"
— Thomas Pynchon engaging in Self-Deprecation on The Simpsons, "Diatribe of a Mad Housewife"
Advertisement:

Thomas Ruggles Pynchon, Jr. (born May 8, 1937) is an American author and famously Reclusive Artist, probably most well-known for his novel Gravity's Rainbow. He is one of the most notable writers of the literary movement of Postmodernism, and his works are highly renowned.

An almost mythic figure. Only three known photographs of him exist, dating from the 1950s. He has given no interviews, no signings. His voice has been recorded only for the guest appearance mentioned above (one of two appearances he made on The Simpsons) and a promotional video for his book Inherent Vice. Speculation about him has been fueled, including suggestions that Pynchon is a pseudonym for J.D. Salinger, as claimed by William Poundstone. It was even suggested at the time that he may have been the Unabomber. Fan folklore is rich and complicated, fed by the tiny bits of information about Pynchon that have come out, through the man himself or otherwise.

His works are often long, exceedingly complex and completely hilarious. Despite constant and often in-depth discussions on imperialism, industrial society, religion, science, mathematics, technology and racism, along with heavy borrowing from both world history and the history of literature, Pynchon's novels are equally interested in so-called 'low-culture,' television, comic books and rock 'n' roll (common to the postmodernists), with the emotional centre of his books usually residing with a 'schlemiel' (leading, predictably, to the comment that most Pynchonian heroes likely couldn't read his books). In addition, his books are silly and cartoonish, jumping back and forth between absolutely ridiculous and very bleak (but mostly sticking to the former), and are full of humorous obscenity and absurdism.

At this point we should probably say a word on the topic of paranoia. Paranoia is the fuel Pynchon's novels run on, and is likely his most recognizable thematic obsession. Characters become convinced that their actions are being manipulated (and is usually confirmed, then denied, then confirmed again, leaving the audience in the dark about what exactly to believe), shadowy cabals are hinted at (but almost never confirmed) and the constant, sinking fatalism that our destruction is ensured, sooner or later, but only at Their convenience. Pynchon often explores Conspiracy Theories as a form of social narrative and folklore, and as a rigid interpretive framework, frequently contrasted with other frameworks (Calvinism and Marxism are common). This shows especially in The Crying of Lot 49, which involves a character trying to make sense of various signs and symbols she sees around her (as well as a band called The Paranoids), and Gravity's Rainbow, in which even the narrator himself seems to have the novel escape from under him as he struggles to find some way to interpret the events. Anarchism sometimes shows up as well, most notably in Against the Day, although a case could be made that it is present in nearly all of his works due to the strong distrust of hierarchical authority implied by their plots.

A movie adaptation of Inherent Vice, directed by Paul Thomas Anderson, was released in 2014. It is the first full-scale adaptation of any of his works—50 years after his debut novel.

Novels by Thomas Pynchon with their own page include: