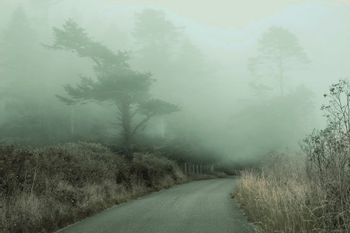 "Welcome to Scenic Dunwich!"
"Arkham, Dunwich
Arkham, Dunwich
Filled with haunting fears
Neighbors who hide up in the attic
Inbreeding happily for years."
— A Shoggoth on the Roof
NOTE: For the novel, see Lovecraft Country. For the TV adaptation of said novel, see here.
Advertisement:

Lovecraft Country is a dark, twisted version of rural New England as used as a setting for horror fiction. Named for the author H. P. Lovecraft — a native of Rhode Island, where there were no places named after him until 2013 — who wrote a number of tales set in a New England milieu, usually small isolated towns that look boring and mediocre at first but are actually dark and foreboding on the inside, populated by hostile and corrupt (in several ways) hicks that often are not quite human, twisted by the influence of ancient horrors and extradimensional aliens (and generations of inbreeding).

Milder versions of this can be found in other types of horror. The setting trend was then continued by Stephen King, a more contemporary famous American horror writer, although he sets his stories in Maine as opposed to Massachusetts and Rhode Island. In fact, you could divide it into southern New England being Lovecraft territory and northern New England as King country. If you don't want as many New England accents, upstate New York or the Pine Barrens will do, although it probably won't be quite as Eldritch. New Jersey variants are particularly likely to be lighthearted or played for laughs, because, hey, Joisey. As for why this area seems to attract so much horror fiction (aside from Lovecraft and King writing what they knew and other writers following the leader)... if you ever go to New England in autumn or winter, you'll find it quite scenic during the day (the fall foliage is a major tourist magnet, as are the region's abundant ski resorts), but the sun sets early and it gets dark, cold, and spooky fast. Not so coincidentally, upstate New York is the birthplace of the Spiritualist movement. The Salem Witch Trials probably also have a role to play (cf. Salem Is Witch Country). Expect a New England Puritan to show up, drawing on the region's history as a hotbed of religious fundamentalism.

This setting has certain common points with the Deep South — despite stereotypes, the New England hills house plenty of billies with necks as red as you'll find anywhere south of the Mason-Dixon Line. The depiction could be construed as condescending and offensive to those who live in such environs, but there are two important differences: In Lovecraft country, evil and corruption is mostly supernatural (and racial) in origin, and the setting is solely used for horror stories. American TV can depict a rural New England that is not Lovecraft Country, but the rural South is almost always the Deep South, unless the author is a Southerner themselves.

Most examples are Literary, as successful adaptations to other media are seldom seen.