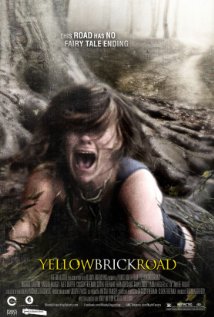 YellowBrickRoad is a 2010 horror film by Jesse Holland and Andy Mitton that starring Cassidy Freeman, Anessa Ramsey and Laura Heisler.

In 1940 the entire population of Friar, New Hampshire spontaneously walked into the forest surrounding the town. Rescuers recovered a single deranged survivor but the rest of the townsfolk either disappeared entirely or else were found dead of exposure or various acts of violence. 70 years later, a husband and wife explorer team have been seeking access to the official records of the incident to no avail. When the records are unexpectedly released, they quickly organize a team of scientists and set off in search of the secret behind an entire town's self-destruction.