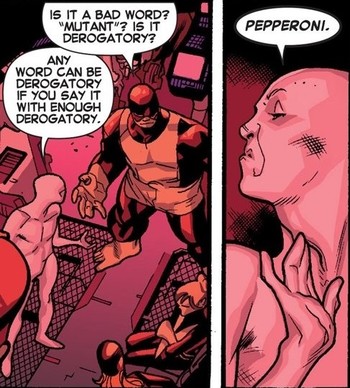 Mamma-mia! Now I can't go for that type of pizza, because it has the P-word in the name!
Sebastian: Well, your objections have been duly noted and summarily overruled.
Sarah: Yes, sir!
Sebastian: How come when you say "yes, sir" it kinda sounds like "fuck you"?
Sarah: Practice!
— Hollow Man
Advertisement:

This language trope is most common to family fare: A character's spoken line contains no profanity whatsoever, but the tone and phrasing used by the actor is so obvious that the audience will hear the intended profanity just the same.

This trope does not include made-up swear words or Last-Second Word Swap. The line is spoken with perfectly mundane words and the actor's inflection, tone and facial expression is what conveys the more intense and profane parenthetical. Super-trope to Witch with a Capital "B". Often shows up in Bowdlerized or TV-dubbed versions of movies. It also occurs a lot in the political arena.

Compare Stealth Insult, Precision F-Strike. Not to be confused with Narrative Profanity Filter, where a character really does swear—it just doesn't appear directly in the text, or with Mondegreen Gag, which is when a character doesn't swear, but a word they say can be misheard as a swear word.