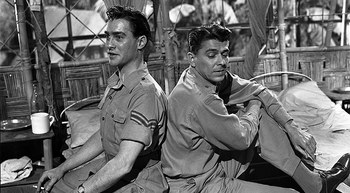 The Hasty Heart is a 1949 British-American World War II drama film adapted from the 1945 play of the same name by John Patrick, directed by Vincent Sherman and starring Richard Todd, Patricia Neal, and Ronald Reagan.

It is August, 1945, in the Burma theater of operations. On what is literally the last day of the war, August 14, Cpl. Lachlan MacLachlan (Todd) is hit in the back with a piece of shrapnel from a land mine. The doctors at an army field hospital save his life, but his kidney is destroyed and has to be removed. That turns out to be very bad, as the doctors discover that his other kidney is defective, dooming him to death by renal failure and uremic poisoning in a matter of weeks. The doctor in charge of the field hospital elects not to tell him.

The ward MacLachlan is introduced into includes a clutch of generic characters, like an Australian called "Digger", a New Zealander called "Kiwi", a Brit called "Tommy", an American called "Yank" (Reagan), and "Blossom", a Basuto who's called that because it's the only English word he knows. They're looked after by "Sister" Margaret (Neal), who is not a nun

but is the head nurse. The other patients take a quick dislike to MacLachlan, who is rude, abrasive, and stand-offish. When the doctor asks the men to befriend MacLachlan in his final days, they give it their best shot, but an unknowing MacLachlan doesn't make it easy.