Series / Have I Got News for You 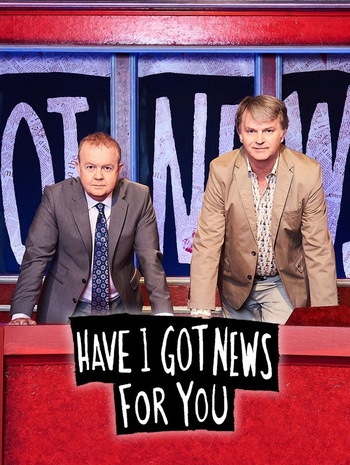 "Good evening, and welcome to the show that's so important that The Independent last week asked 'Is Have We Got News for You or Casualty or Brookside really a worse alternative than cannabis and recreational buggery?' Answers on a postcard."
— Intro to Series 14, Episode 4.
Advertisement:

Have I Got News For You (or HIGNFY for short) is a satirical Panel Show focusing on politics and general news that has been running since the end of the Margaret Thatcher era, with two series per year. The two team captains are Ian Hislop (editor of satirical magazine Private Eye) and comedian Paul Merton; each team has a single guest contestant. As well as comedians, journalists and TV personalities, even politicians have appeared on the show as guests.

The show began with Angus Deayton as host, but he was fired after being caught taking cocaine. Twice. With a lady who was definitely not his partner at the time, who later turned out to be a prostitute in disguise, who was working for the papers. And That's Terrible. On the episode after this came to light, Hislop brought out the paper and liberally quoted from the article; Merton went one better and wore a T-shirt with the front page of the newspaper printed on it. Beginning with the third episode of the following series, the show began using guest presenters; some, like Alexander Armstrong, Jo Brand, Victoria Coren Mitchell and David Mitchell have hosted many times, but the list of one-off hosts includes Jerry Springer, Brian Blessed and William Shatner. The show has also attracted a fair amount of infamy for its role in propelling Boris Johnson into the spotlight through his appearances as a panellist and host.

The show's basic rounds are:

A commemorative documentary entitled Have I Got 30 Years for You

was released last Christmas Eve 2020, in celebration of the program's 30th anniversary and thriving in the midst of the COVID-19 Pandemic, as well as acknowledging contentious aspects of the program's history (such as the end of Deayton's tenure and the rise of Boris Johnson).