Radio / Round the Horne 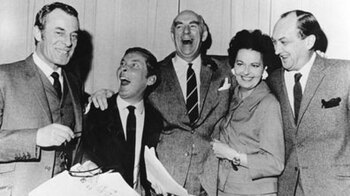 Round the Horne was a 1960s British radio comedy starring Kenneth Horne, Kenneth Williams, Hugh Paddick, Betty Marsden, Bill Pertwee, and their announcer Douglas Smith. The main writers were Barry Took and Marty Feldman. The show was a Spiritual Successor to Beyond Our Ken, which had featured many of the same cast but a different head writer; when he left it was decided to revamp the series with a new title and characters.

It took the form of a ramshackle local variety show with Kenneth Horne as MC, with sketches, songs, incomprehensible public service announcements, and "the answers to last week's questions" (the questions themselves were never actually announced). Double Entendre and corny old gags were rife, and sketches frequently appeared to break down into out-of-character bickering about the size of the parts and the quality of the scripts.

The show was also populated by a collection of eccentric local characters (actually played by the cast, but treated as separate people within the show and never broke character). These included the folk singer Rambling Syd Rumpo, whose songs were peppered with incomprehensible words that sounded like they'd be extremely rude if one only knew what they meant; J. Peasemold Gruntfuttock, the world's dirtiest Dirty Old Man; and the show's breakout stars, the perpetually out-of-work actors Julian and Sandy, who were originally only supposed to appear in a single sketch but wound up returning in nearly every episode for the rest of the series.

Was scheduled to return in 1969 for a fifth series but Kenneth Horne died of a heart attack aged 61 in February of that year, precluding any further series.

BBC Four broadcast stage performances of the original scripts in 2004.

Not to be confused with Around the Horn, the ESPN sports pundit show.