Theatre / Barefoot in the Park 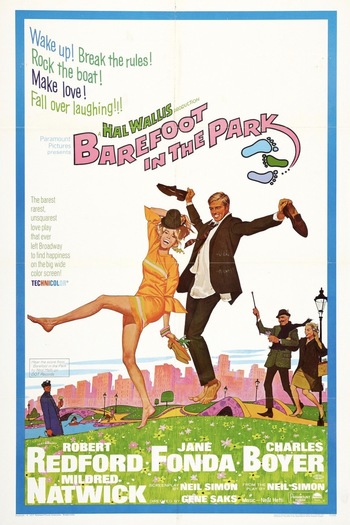 A popular Romantic Comedy by Neil Simon, which premiered on Broadway in 1963.

Newlyweds Corie and Paul Bratter return from their honeymoon ready to start their exciting new life together in a minuscule fifth-floor walkup apartment in a Greenwich Village brownstone, but things aren't exactly going as planned. The impulsive Corie's apartment choice doesn't meet Paul's — or any sane person's — standards. Six exhausting flights of stairs lead to a one-room apartment which lacks bathtub, furniture, heat, and room for a double bed. What highlights does the apartment supply? Eccentric neighbors, including the attic-dwelling Victor Velasco, and a giant hole in the skylight. Still, Corie is determined to make things work, even playing matchmaker between Velasco and her widowed mother, Ethel Banks.

Mike Nichols directed the original Broadway production, which starred Robert Redford as Paul, Elizabeth Ashley as Corie, Mildred Natwick as Ethel, and Kurt Kasznar as Velasco. A feature film adaptation, directed by Gene Saks, was released in 1967; Redford and Natwick reprised their stage roles, with Jane Fonda appearing as Corie and Charles Boyer as Velasco. The play has also received two TV adaptations: a short-lived ABC sitcom in 1970 and a 1980 special on HBO.

Alternative Title(s): Barefoot In The Park