Theatre / The Boys in the Band 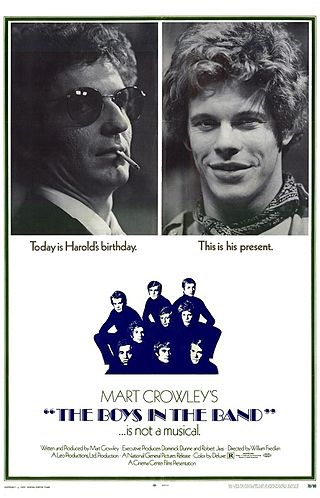 "I don't understand any of it, I never did."
Michael: What's so fucking funny?
Harold: Life. Life's a goddamn laugh riot.
Advertisement:

Michael, a gay recovering alcoholic, along with friend and sometime lover Donald, is throwing a party for his buddy Harold's 32nd birthday. The guests include flaming queen Emory and his best friend Bernard, seemingly straight schoolteacher Hank and his monogamy-impaired lover Larry, and "Cowboy", Emory's gift for the guest of honor. However, their fun is cut short by the arrival of an unexpected party guest - Alan, Michael's questionably heterosexual college chum. This, along with Michael falling Off the Wagon, leads to a night of soul-searching and all of the guests being forced to confront the most uncomfortable aspects of themselves.

The Boys in the Band is an off-Broadway play written by Mart Crowley which premiered in 1968. It was faithfully adapted into a film (starring the original stage cast) by William Friedkin in 1970. When it first opened, it was notable for the being first mainstream play (and film) to treat gay people in a direct and realistic way rather than cloaking it in subtext or portraying the characters as freaks. Furthermore, to quote Vito Russo, "The internalized guilt of eight gay men at a Manhattan birthday party formed the best and most potent argument for gay liberation ever offered in a popular art form."

As it turned out, it was gay liberation itself that made The Boys in the Band go from being groundbreaking and revolutionary to a being a nasty relic of the Bad Old Days™ in the near instant, thanks to its bad timing. While the play was released in 1968, the Stonewall Riots occured in 1969 — and the film had the bad sense to be released in 1970 during the height of gay liberation. For years, it was often demonized as being not only dated, but flagrantly offensive. Over time, however, it's been re-vindicated by history, with more and more people recognizing it as a classic, eventually leading to a stage revival in 1996

, and a Netflix film remake

Alternative Title(s): The Boys In The Band