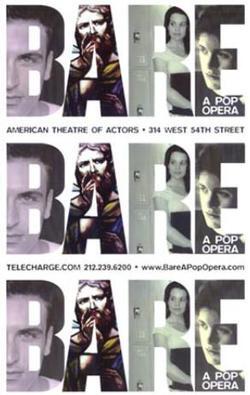 Bare, or bare: a pop opera, is a musical by Jon Hartmere, Jr. and Damon Intrabartolo. The musical focuses on the relationship between two homosexual Roman Catholic students and the challenges they face with their own identities and others' perceptions.

The story centers on the school's theater production of Romeo and Juliet. Peter Simons and Jason McConnell have a secret relationship. Peter is comfortable with his sexuality and the relationship (and has been wanting to tell his mother he's gay since he was 12), while Jason, a popular athlete, is hesitant to come out due to his religious beliefs and his fears about the impact the information would have on his relationships with his parents, friends and life. While the first musical number, "Epiphany", features Peter having a nightmare about his fears of being shunned by everyone he knows after coming out, Peter, unlike Jason, knows that he is gay and has accepted it as a fact. Peter worries about the social impact coming out would have, but he still wants to come out. Jason, on the other hand, is still struggling with, "Am I gay or not? Is my loving Peter a sin the way the Church says it is? Wouldn't my life be ruined if everyone found out?" There are other characters, such as Jason's twin sister, Nadia McConnell (aka Plain Jane Fat Ass), Ivy Robinson (the foil to Peter; her main problem comes from falling in love with Jason), Matt Lloyd (the guy who comes in second to Jason in everything), Diane Lee (the Perfect Catholic Girl), The Priest (who perfectly parrots Catholic doctrine but who has no compassion), Sister Chantelle, Claire (Peter's divorced mother), and Lucas (the school's drug dealer).

The students experiment with drugs, sex and alternative beliefs to their religion. Hilarity Ensues. Except it doesn't.