For the trope-naming 1985 teen film, see The Breakfast Club. 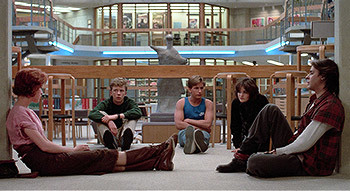 A gang of misfits whom no-one likes and/or don't like themselves (and perhaps each other by extension) get together, or an elder, often a Zen Survivor, brings them together. A circle of True Companions forms out of everyone's lives sucking so much they ended up stuck with each other. If they actually want to stick together because otherwise they would be alone, they are Lonely Together.

Very common in superhero teams who, while, fighting evil, tend not to have flashy headquarters or get a lot of public support or respect. Also could be used for villains, when they're not qualified to be a Quirky Miniboss Squad. The villain version is usually led by a Straw Nihilist.

A concise way of saying it: most, if not all of the cast, in the group count as The Woobie (or at least have a lot of Angst) in their own individual way, even if it may not seem so at first.