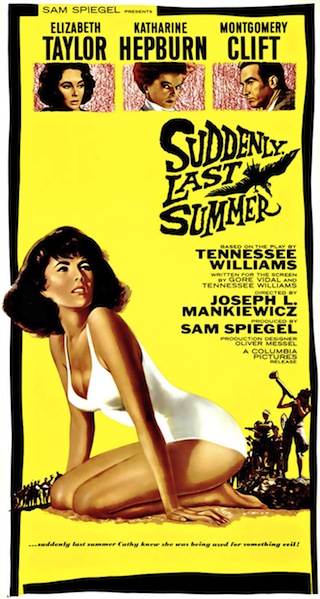 "My son, Sebastian and I constructed our days. Each day we would carve each day like a piece of sculpture, leaving behind us a trail of days like a gallery of sculpture until suddenly, last summer."
— Violet Venable
Advertisement:

Suddenly Last Summer was originally a 1958 one-act play written by Tennessee Williams. The play is very simple in its structure, with the bulk of its text consisting of a pair of monologues (with frequent interruptions), one by Catherine and the other by her aunt Violet, concerning the death of Catherine's cousin Sebastian during the previous summer.

In 1959, it was adapted by Williams and Gore Vidal into a film directed by Joseph L. Mankiewicz and starring Elizabeth Taylor, Katharine Hepburn and Montgomery Clift. The film, which added a comma to the original title, expands the story and plot quite a bit.

New Orleans, 1937. Dr. John Cukrowicz (Clift) is a brain surgeon specializing in lobotomies, who has recently been hired at the State hospital to perform his procedures on patients. However, because the equipment and operating conditions are very poor, he is having a difficult time fulfilling his duties. A wealthy widow named Violet Venable (Hepburn) offers to fund the hospital so that it can build a new wing. However, there is one condition: Cukrowitz must agree to perform a lobotomy on her niece Catherine Holly (Taylor).

Catherine is currently in a mental hospital after returning from a disastrous trip in Europe with her cousin Sebastian. Their trip in the summer had ended rather badly with the death of Sebastian. Catherine, who is suffering from dementia, cannot remember exactly how he died. But, she knows a dark secret about him that Violet wants to keep hidden away.