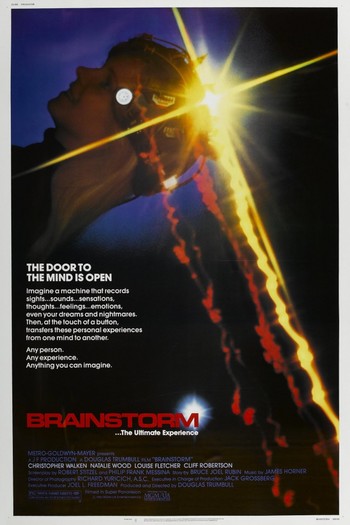 A team of research scientists led by Dr. Lillian Reynolds (Louise Fletcher) and Dr. Michael Brace (Christopher Walken) and later joined by Michael's wife/co-worker Karen Brace (Wood) develop a device called "The Hat", which can record one's experiences while you're having them, then play the tape back to anyone.

The lab's general manager, Alex Terson (Cliff Robertson), wants them to make a recording that will "knock (his) socks off"... so they do, developing one that captures such experiences as eating, hang gliding, flying a jet, driving a race car, and riding a roller coaster. Jenkins, the person representing the people funding the project, is very impressed as he realizes that you can "plug right into the old noodle". It is eventually revealed that the group is developing new ways to do a variety of dubiously ethical and ultimately horrible things under Project Brainstorm.

The movie goes on to show other problems with the development of this technology, some good, some bad. The consequences of being able to receive others' experiences is not always so good. During the film, one of Michael's co-worker's becomes addicted to a section of a tape where a co-worker taped himself and his girlfriend having sex. He had cut out the section where orgasm occurred and played it in a continuous loop for hours. There's also a tape—part of a library of tapes developed to brainwash and torture people—that was so horrible that it would cause psychosis if you played it.Michael's curious son plays it and has a psychotic break that sends him to the hospital but does recover.

The remainder of the story revolves around Michael honoring his late friend. He's determined to finish playing a particular tape that his colleague and friend, Lillian, had made of her own death from a heart attack, and he makes every effort to be able to see it because the tape doesn't end with her death - it keeps recording her experience as she enters the afterlife.

During the first playback, the management decides to have someone monitor the tape Michael is experiencing. A technician tries to warn their chief researcher about the changes Michael had made to his output but is ignored, and their test subject dies of a heart attack. Michael eventually is able to play the tape in its entirety before waking up from it, overwhelmed and touched.

An interesting effect of this is, the experiences, which required a kind of very shiny metallic-optical tape about four inches wide, could be transmitted using an acoustical coupler modem over a phone line going to a pay phone. Apparently, they were able transmit and receive recordings over a voice-grade line at about 23590 bps.note  It's not explained what the raw data is and it could simply be just where and when a part of the brain is stimulated or recorded.

A well-known Troubled Production due to Natalie Wood's tragic death in 1981 before the film was finished. The film was nearly canned by the studio, but director Douglas Trumbull said the film could still be completed, and it took about two more years of re-shoots and editing to work things out and finish the movie before it was finally released in 1983. The stress of finishing the film after Wood's death pushed the director away from moviemaking as well.

Not to be confused with the film of the same name from 1965.

Some tropes exposed by the film: