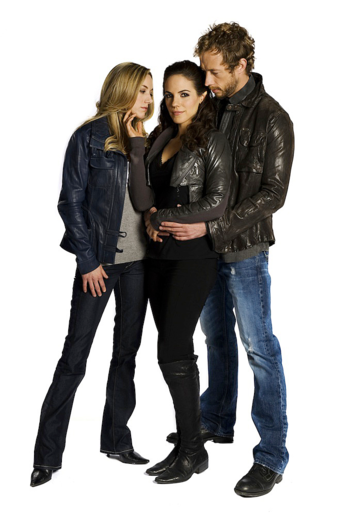 This is a subtrope of Love Triangle where the central character has two options of different sexes or genders. The conflict comes from having to choose between a same-sex and an opposite-sex relationship, as society still treats both very differently regardless of how the character themselves feels about it. Choosing the gay option might mean facing discrimination, while choosing the straight option might be seen as "settling" or "not actually bisexual". Historically, instances of this have ended very poorly for the same gender member—with gayngst being common, the same-gender love interest often giving up on their affections, and them almost always never being treated too seriously due to Incompatible Orientation. Newer works are more likely to make the triangle an actual choice by having the central character be outright bisexual or have feelings for both anyway.

This is common in coming-out-stories where the character is still figuring out their sexuality. It also often overlaps with Closet Key. As a result, there's no rule for the character to be any particular sexuality and it does not just apply to characters who are bisexual (although this is the most common version). It may be a gay or straight character who is "confused" about their sexuality or trying to figure themselves out. In this case, it will usually involve a Last Het Romance.

Stories which prominently feature a Gender Bender will often give the affected a pair of opposite sex love interests. These tend to implicitly or explicitly involve Trans Equals Gay, connecting a relationship with their former sex to identifying with their current one. Some combination If It's You, It's Okay and Jumping the Gender Barrier is typically involved. However, if a character is a casual Sex Shifter, such a mix of different loves could be considered with much less conflict.

Compare and contrast Everyone Is Bi, which is when bisexuality and the sexes and genders of potential love interests are portrayed as no big deal. Even then, though, due to the different expectations around homosexual vs. heterosexual couples, this trope may still apply.

But Not Too Bi might come into play when it comes to choosing a winner — the character may express interest in both of their love interests, but will get with the one whose sex/gender they have been dating more often, or the one the target audience considers more "acceptable" (for a long time in mainstream media this would be the straight option, but Queer Media might lean towards the same-sex option).

Please note that this trope does not include all Love Triangles where the central character happens to be bisexual. Relationships between the male and female love interests must have different connotations that affects the main character's decision (or lack thereof). Compare Betty and Veronica for another way to play a "safe vs. more dangerous" love triangle. Due to the gender dynamics inherent in the bisexual love triangle, this may also cross over with Brooding Boy, Gentle Girl, Male Might, Female Finesse, Masculine Girl, Feminine Boy, Savvy Guy, Energetic Girl, or Strong Girl, Smart Guy.

If this love triangle gets too dangerous, it may play into Depraved Homosexual, Psycho Lesbian, or Depraved Bisexual stereotypes, and may, under certain circumstances, fall completely into Psychotic Love Triangle.

Greta confides in Alucard about a disasterous relationship between herself, a man, and a woman.

Greta confides in Alucard about a disasterous relationship between herself, a man, and a woman.