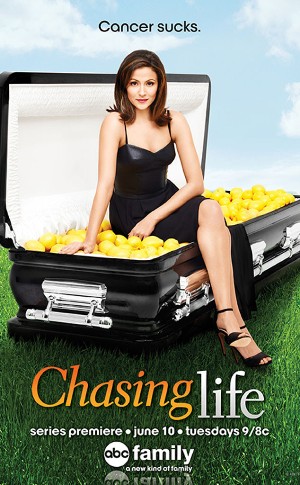 She's making lemonade out of some very sour lemons.
"You never truly live until you know you're gonna die."
— Gerald
Advertisement:

Chasing Life is an American television drama series that premiered June 10, 2014, on ABC Family. The series is adapted from the Televisa Spanish-language Mexican television series Terminales.

), an aspiring journalist whose goal in life is to impress her editor and work her way up the corporate ladder. Just as things in both her professional and personal life are starting to take flight, young April learns from her estranged uncle that she has cancer. Now she must decide how she wants to live the rest of her life—without knowing how much life she actually has left.

Cancer stories have an innate sense of urgency built into the premise, with the constant threat of death ticking in the background like a factory-installed clock. Chasing Life does something interesting (if ultimately somewhat problematic) with this ticking clock: it sort of ignores it. April gets diagnosed before the second-act break of the pilot, but any urgency that comes with this diagnosis gets strangely buried, added to the already haphazard pile of complications that is her life.

The show premiered in June of 2014 with an initial order of only 13 episode, but an additional seven episodes were later added to the first season order. It ended the following year after a 13 episode second season.