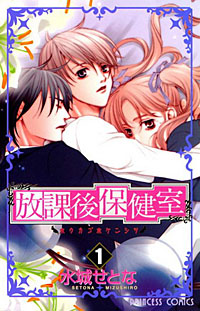 After School Nightmare (Houkago Hokenshitsu, literally translated as After School Infirmary) is a Shoujo Psychological Horror manga written and drawn by Setona Mizushiro, which was serialized in the magazine Princess from 2004 to 2007 and compiled into 10 volumes. The manga was licensed in English by Go! Comi, but the English editions went out of print after the imprint was shut down and the license has expired.

It is about a biologically intersex teenager, Mashiro Ichijo, whose body is male from the waist up but female from the waist down. Mashiro was raised as a boy but is terribly afraid that his various weaknesses and failings mean that he is actually a girl.

The manga begins with young Mashiro getting his first menstrual period. He comes across a strange woman, the clinician at a school clinic that he never noticed before, who tells him he must attend a special class once a week if he wishes to 'graduate'. In this class he and other troubled teens enter a Dream Land, where they take on the form of their "true selves" and must fight for the right to "graduate". Mashiro also finds himself in a Love Triangle with Kureha, a pretty girl who fears men and likes him because he is not quite male, and Sou, a handsome boy who believes that Mashiro is a girl.

After School Nightmare provides examples of: