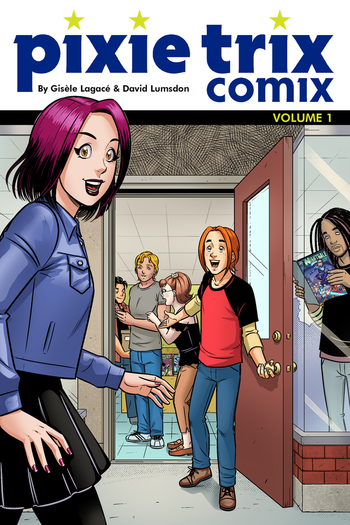 Pixie Trix Comix is a sequel/spinoff Webcomic to Ménage à 3 (and to its previous spinoff, Sticky Dilly Buns), following on immediately from the final strip of that comic on the 11th of April 2019. (It originally even shared a web URL with its parent comic.) Similarly to the previous comics, it is written and drawn by Gisèle Lagacé (“Giz”) with input from Dave Lumsdon and T Campbell. The title and presentation suggest that it centers on a fictional Montreal comics shop named, yes, “Pixie Trix Comix” (also, in fact, the name of the publisher of these strips), which frequently appeared in the older stories. However, it turns out that the shop is branching out into comics publishing, and recruiting new people for this — perhaps a rather flagrant instance of Write What You Know. As three of the main characters soon move in together, what starts as a Work Com also turns into a Roommate Com.
Advertisement:

Like the parent comic, this is constructed as a very traditional four-panel strip (the western equivalent of a Yonkoma); there are always four panels, or occasionally some double panels. Originally, they appeared online as a single row of four, but since a major Website redesign in early 2020, they have been posted in a 2x2 layout. (As the creators' print collections have always been printed with this 2x2 format, any double panels are always located in positions 1 and 2 or 3 and 4.) Also, the great majority of strips end with some kind of comedy punchline, despite the fact that there is a continuing story.

The first strip, which demonstrates the comic's willingness to feature both pre-existing and new characters, is here