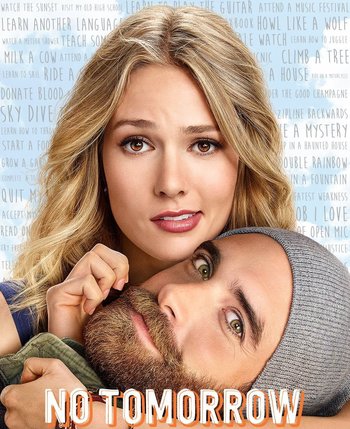 Life's too short to play it safe.
Advertisement:

No Tomorrow is a 2016 romantic comedy series that aired on The CW, based on the Brazilian series Como Aproveitar o Fim do Mundo (How to Enjoy the End of the World).

Evie Covington (Tori Anderson) is a cautious young woman in Seattle, working at web retailer Cybermart when she meets the free-spirited Xavier (Joshua Sasse), who encourages her to live every day like it's her last.

Just when she starts to think he's the perfect guy for her, the other shoe drops — namely, that Xavier believes the apocalypse is imminent. Together, Xavier teaches Evie to be more fun-loving and spontaneous, while Evie helps Xavier to be more committal and responsible.

The show wasn't picked up for a second season.

No Tomorrow contains examples of the following tropes: