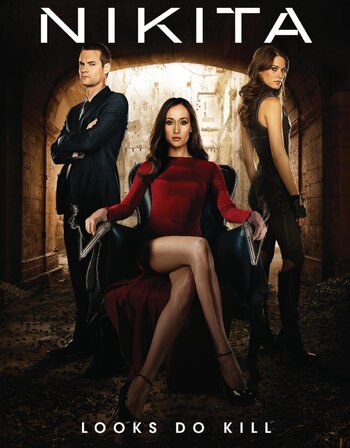 "...and the last word they'll breathe before the end will be my name."
Advertisement:

A secretive United States government agency known as "Division" has for years been recruiting young adult convicts by faking their deaths and forcing them to train as spies and assassins. The recruits are brainwashed and threatened with a violent death should they fail in their assigned duties. Answering to no higher authority in the U.S. Government, Division has in recent years begun to go rogue, hiring out their particular services to the highest bidder.

Nikita was once one of Division's best operatives, but she escaped prior to the start of the series and went rogue after the agency had her fiancé killed. After three years spent planning her revenge, Nikita declares war against the agency by thwarting a crucial assassination. Unwilling to remain hidden in the shadows any longer, Nikita delivers a message directly to Division's director... she is going to bring the agency down, one mission at a time if she has to, and she vows to ensure that no one else will have their lives stolen in the way that Division took hers.

Nikita is an action-drama TV Series based on the 1990 French film of the same name. Premiering in 2010 on The CW Network, the series stars Maggie Q, and is produced by Warner Bros.. The series ran for four seasons, with its fourth season comprising six episodes. The final episode aired on December 27, 2013.

Not in continuity with the previous series, La Femme Nikita, on which it is also based.

As of February 2020, there are reports that another attempt to revive Nikita is in the works. According to some entertainment news sites, it could be planned to be a soft reboot-type continuation of the show.