Shot to the Heart 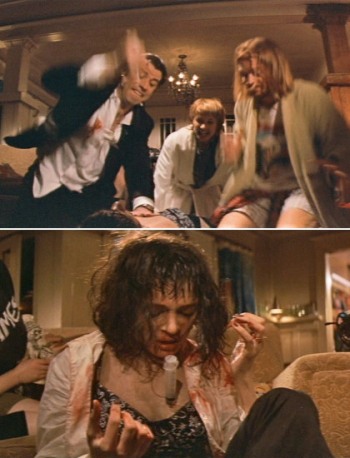 Huh. I don't remember that being there.
"Zoe flat-lines and gets the Adrenaline-in-the-Heart treatment. Mal follows suit with the self-administered Adrenaline-in-the-Heart. (Medical note — Records show this is becoming televised treatment of choice as it was also applied in the second season's première of Alias)."
— Two Evil Monks, recap of "Out of Gas" from Firefly
Advertisement:

We've all seen it before. The patient is going into shock, he's losing consciousness! His heart's stopped, and the paddles aren't working. He's not going to make it! Only one thing left to do. Shot to the heart, stat! His heart's beating; he's stabilizing. Crisis averted!

Shot to the Heart is when an injection of adrenaline (clinically termed epinephrine) is administered directly into a patient's heart, usually by a forceful stab. This can be done for a number of reasons, usually to restart a stopped heart or to restore or maintain consciousness. If the injured person is particularly badass or determined, he may even do it to himself so he can stay conscious long enough to save the day.

The trope was made popular by 1994's Pulp Fiction when hitman Vincent Vega does it to save the life of Mia Wallace, who has OD'd on heroin and also happens to be his boss's wife. Today it's right up there with a tracheotomy when you need some drama, but in reality, this is generally a very bad idea and almost never practiced by medical personnel. The one exception is traumatic cardiac arrest; while cardiac arrest due to a non-traumatic cause is managed with CPR, traumatic arrest is sometimes managed with thoracotomy. Thoracotomy is a surgery that exposes the heart for direct cardiac massage, and epinephrine can be injected directly into the heart at this time. Intracardiac injection was practiced for nontraumatic cardiac arrest throughout the 1960's, but use declined in the 1970s as better forms of rapid vascular access were developed. In addition, intracardiac injection risks damaging a coronary artery and requires a pause in chest compressions.

In spite of this, it remains a popular trope, especially in medical dramas and grittier action films, though subversions and lampshade hangings are starting to show up in comedic works.

A subtrope of Artistic License – Medicine. Compare Healing Shiv. See also Instant Drama, Just Add Tracheotomy and Magical Defibrillator for similar use of emergency medical procedures for drama. Not to be confused with shooting someone in the heart with a weapon.