Spies in a Van 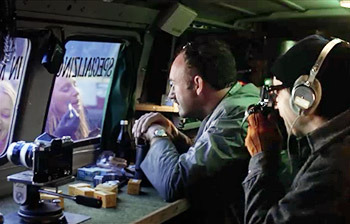 "You know what? I'm sick of being in the van. You guys are going to be in the van next time. I've been in the van for 15 years, Harry."
— Gib, True Lies
Advertisement:

So here's the plan: to accomplish our mission, we're going to need a subtrope of The Stakeout. Plotwise, it will go down the same way as a traditional stakeout, but to make things more interesting, we'll be adding a vehicle. A vehicle that looks like any other normal vehicle on the street. But on the inside, it'll be filled with all sorts of electronics and several spies monitoring cameras and bugs they've planted.

Most of the time, this trope will be Exactly What It Says on the Tin:

First, we'll need some spies. They can be highly skilled police detectives or bumbling idiots. What we're looking for is the ability to further the plot or provide comedy relief as required by the writers. The spies will work for the organization. Most often, it's a slightly corrupt but well-intentioned AntiHeroic Government Agency of Fiction that uses this tactic, but the Big Bad will often have these too. Sometimes it's operated by a much smaller organization, such as a private detective or a pair of crooks planning The Caper.

Next, we'll need a van. The vehicle selected will need to provide sufficient space for the spies to do their job, have relatively few windows, and be reasonably maneuverable, high-speed, and, most importantly, nondescript. Of course, it doesn't have to be a van or even a traditional land vehicle for that matter. After all, surveillance equipment can also be placed in a tractor trailer, boat, aircraft, or spacecraft. It's just that vans tend to look more... ordinary. The van is often, if not usually, camouflaged with a fake business logo (telecoms, electrical contractors or plumbers); in comedies this is often a Paper-Thin Disguise Played for Laughs.

Regardless of its exact form, enclosing the operation in a vehicle has several advantages. First, it allows The Stakeout to move, often following a specific individual, without having to pack up the equipment. The van can tail or pursue a person of interest, or be used to kidnap them. The van can serve as Mission Control as well. In a pinch, the van can be used as a getaway car, safehouse, or emergency headquarters should the Elaborate Underground Base be compromised.

Once in disguise, this trope will be completely indistinguishable from its sister trope Van in Black. Except for one thing: in Van in Black, you'll never know exactly what the vans are doing, if they're really spying on you or not, or even if they're really there or just a figment of your imagination. But not here. In this trope, you, the audience, represented by this man in the white shirt and blue pants, will have full visibility of the operation from within. Keep that in mind when adding examples and you should fit in just fine.

Welcome to the inside.