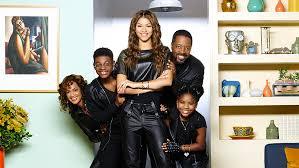 Oh, nothing. Just a family of spies! No big.
Advertisement:

K.C. Undercover is a Disney Channel Spy-Comedy that premiered on January 18, 2015. The plot centers on sixteen year old K.C. Cooper (Zendaya), who discovers she comes from a family of spies, and gets recruited to join them. Thus she must now balance out being a teenager and being a spy.

The show also is rated TV-Y7-FV, a first for any Disney Channel original series.

Like her previous series, it ran for three seasons