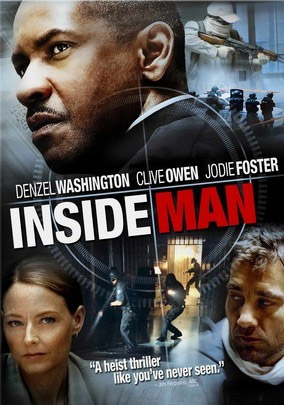 "My name is Dalton Russell. Pay strict attention to what I say because I choose my words carefully and I never repeat myself. I've told you my name: that's the Who. The Where could most readily be described as a prison cell. But there's a vast difference between being stuck in a tiny cell and being in prison. The What is easy: recently I planned and set in motion events to execute the perfect bank robbery. That's also the When. As for the Why: beyond the obvious financial motivation, it's exceedingly simple... because I can. Which leaves us only with the How; and therein, as the Bard would tell us, lies the rub."
— Opening Monologue
Advertisement:

Inside Man is a 2006 thriller Heist Film directed by Spike Lee about a Bank Robbery. What seems like a normal hostage-taking robbers versus police siege scenario soon becomes complicated by the unexpected involvement of the bank's owner.