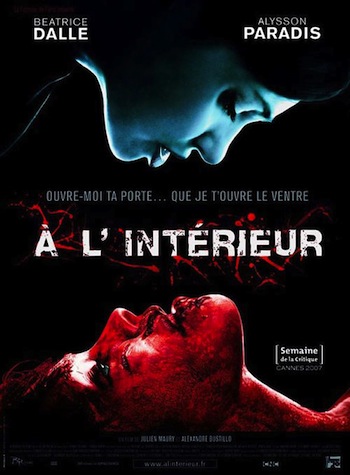 Much like roller coasters and hard liquor, the pregnant should stay well away from this.
"Open it, Sarah. Don't be afraid. You don't want that child. I'll take good care of him..."
— La Femme
Advertisement:

Inside ("À l'intérieur") is a French home invasion horror film released in 2007 and co-directed by Julien Maury and Alexandre Bustillo, noted for its extreme gore and violence.

On a bleak, rainy day, a pregnant photojournalist named Sarah Scarangelo is involved in a grisly two-vehicle crash that kills her husband, Matthieu. Skipping ahead four months, the film depicts a now bitter, detached, and depressed Sarah being told by her doctor that she should go into labor the next day, Christmas. Preferring to be alone to wait out the inevitable birth, Sarah blows off her mother, Louise, and is given a lift home by her boss, Jean-Pierre, who she arranges to have drive her to the hospital the next morning.

As Sarah tries to get comfortable in her desolate little house, she is interrupted by a knock at the door. A mysterious woman with a pair of scissors (referred to simply as "La Femme") asks if she can borrow Sarah's phone because her car broke down. When Sarah refuses, La Femme refers to Sarah by name and reveals she knows about the car accident which took Matthieu's life...

Needless to say, things go south from there.

Noted as being a prime example of Gorn, this picture has so much bloodshed it almost comes off as a non-comedic splatter film. Suffice to say, Nightmare Fuel and Nausea Fuel are in high supply.