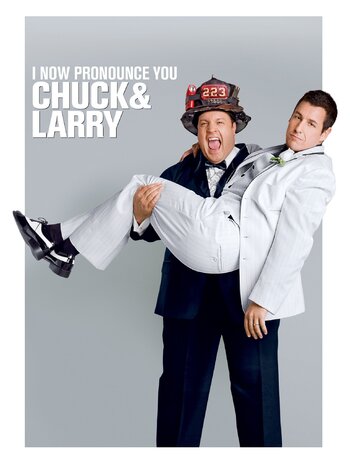 I Now Pronounce You Chuck & Larry is a 2007 comedy starring Adam Sandler and Kevin James. Two New York City Firefighters named Chuck (Sandler) and Larry (James) do a routine sweep of a building. Falling debris showers over Chuck, but Larry uses his body to shield him. As Chuck is saved, he tells Larry that he'll repay him with any favor.

After the accident, Larry, a recent widower, worries about his death and the impact it could have on his two kids. However, he discovers that his life insurance policy won't allow him to change his beneficiary from his deceased wife to his children due to him not experiencing a major life event. As he neglected to fill out the paperwork after his wife's death, he's left with getting remarried as the only option available to update his policy. Realizing New York legally recognizes domestic partnerships, he pleads for Chuck to have a domestic partnership with him. Realizing that he owes him one, he agrees.

However, things get complicated when they're repeatedly investigated for potential fraud and forced to keep acting gay in public to maintain the ruse — particularly difficult for Chuck due to his lady killer tendencies and especially his growing attraction to a lawyer, Alex, who supports and represents them. The two also begin to learn that living openly as gay men creates further complications as the two previously homophobic men are now subjected to the same persecution legitimately gay people are.