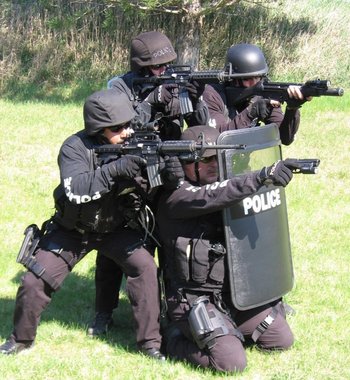 SWAT officers practicing their tactics.
"S.W.A.T. is a life-saving organization, not a life-taking one. That's why the FBI and Secret Service come here to train with us."
— Sgt. Dan "Hondo" Harrelson, S.W.A.T.
Advertisement:

Sometimes, even the cops have to dial 911.

One of the more iconic, recognizable, and dramatic images of law enforcement, a Special Weapons And Tactics Team cuts an immediate and dramatic figure in any crime drama, police serial, or other story that immediately tells everyone present that the situation is deadly serious. They are usually called in for hostage scenarios, fortified and armed suspects, high-risk warrant raids, riot control, and terrorist threats. SWAT teams are easily recognizable, clad in black/blue clothing, helmets, body armor, and wielding heavy weaponry, such as assault rifles or shotguns. They also use special tactical gear like flashbang grenades, and travel in armored vehicles. They usually wear masks, be they balaclavas or gas masks, both for practical reasons (most balaclavas are fireproof, and gas masks help when dealing with tear gas) and to help keep them anonymous and impossible to read.

The role of the SWAT team in fiction varies depending on the work in question. If they're on the heroes' side, they can be either elite, well-equipped problem solvers, the rescue party who bursts in to save the day, or inept or ill-fated mooks who die to show how dangerous the villains are. In other works, a SWAT team can serve as a Hero Antagonist if they oppose a protagonist who is falsely accused or otherwise principled but on the wrong side of the law. If the protagonists are criminals, a SWAT team is often the faceless masses that exist to get gunned down, or a major threat to the protagonists. In very cynical works involving a Crapsack World or dystopia, the SWAT team can be State Sec made up of Dirty Cops. Effectiveness and role generally depends on the Sliding Scale of Law Enforcement.

SWAT teams in fiction are often inaccurately portrayed as opening fire immediately on suspects, or otherwise being Trigger Happy, or even deliberately killing suspects who present no immediate threat. In reality, as the page quote shows, SWAT serves as a life-saving police unit. The ideal objective when a SWAT team is sent in is that everyone—hostage, bystander, operator, and suspect—comes out alive. SWAT officers have very specific procedures they usually have to follow; for example, a SWAT officer is supposed to clearly identify himself to a suspect, and can only open fire if the suspect raises a weapon or otherwise presents a threat to the life or safety of another. Of course, police procedures in a fictional setting may also deliberately diverge from real life, and even in reality, not all jurisdictions have the same standards.

In recent years, the deployment of SWAT teams in real life has been increasingly called into question. Originally intended to respond to situations that, typically, would be unlikely to be encountered even once in any given officer's entire career, the vast majority of SWAT deployments are now to execute arrest and search warrants, often against non-violent offenders. Radley Balko's non-fiction book Rise Of The Warrior Cop covers a lot of the history of SWAT - noting that in the LAPD standoff with the Symbionese Liberation Army, the SWAT team asked for a Grenade Launcher and were told in no uncertain terms that they did not have permission to obtain or use one. Fastforward to the present day, and hundreds of surplus grenade launchers, fifty-calibre machine guns, and armoured vehicles have been given to Police forces across America

- despite the fact that violent crime has been declining for decades

. Indeed, in the late 2010's "SWATting" attacks (where a hoax call is used to try and bait a SWAT team into raiding someone's house — leading to a fatality shortly after the Christmas in 2017

) have become a serious issue. Especially amongst Youtubers, livestreamers, and other online celebrities.

On the other hand, proponents argue that the heavy equipment being distributed to SWAT is more necessary now more than ever. A major catalyst for this argument was the 2008 Mumbai attacks

, where Indian police were completely outmatched against the attackers and led to a SWAT team being formed after the fact. With the establishment of ISIS as well as al-Qaida shifting to a more decentralized operating structure, terrorist attacks involving multiple attackers armed with heavy weapons and armor have become increasingly commonplace, such as the attacks in Paris in January

followed by the December 2015

San Bernardino attack. During the Bataclan siege in Paris, RAID officers credited their military-grade equipment with saving their lives.

May also be referred to as ESU (Emergency Service Unit) in the many shows about New York City Cops.