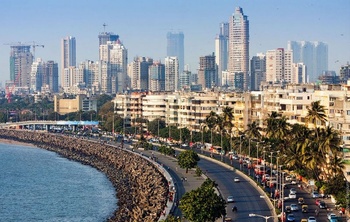 "Bombay was central, had been so since the moment of its creation: the bastard child of a Portuguese-English wedding, and yet the most Indian of Indian cities."
— Salman Rushdie, The Moor's Last Sigh

For most of its history Mumbai was called Bombay. While confusing to most Western observers, the issues surrounding the renaming of the city gives a nice, handy snapshot to the history and legacy of this city and its unique position in the ongoing cultural wars of Indian identity politics.

The word Bombay comes from the Portuguese word "Bom Baim" or "Good Bay" referring to the city's legendary natural harbor. Mumbai derives, as its supporters argue, from Mumbadevi, a local goddess who they claim to have been the origin of the Portuguese phrase and so the true name of the city and the old word being an unwanted relic of the Colonial Era. Without quite deciding who has the right of it in this debate, you can say that the conflict is essentially between the ones that argues that Bombay was historically a cosmopolitan, multi-ethnic city of different faiths and languages (all of whom left their mark on the city's architecture, food and street life as well as the distinct Bombayia Slang of Hindi) and the other view of Mumbai being part of the State of Maharashtra and so part of the neighbouring Marathi-speaking culture of the State (which it only acceded to, after bloody agitation in 1960).

In the old days, it was known as The City of Seven Islands which lamphades the fact that it was essentially formed by merging an archipelago of seven islands: Bombay, Colaba, Old Woman's Island (Little Colaba), Mahim, Mazagaon, Parel, Worli. Since Independence it later expanded further inland to the state of Maharashtra with two more Islands — Salsette and Trombay, and much like American megalopolises has further expanded its reach to outer suburbs (Forming Greater Mumbai) such as New Bombay and it is contiguous to Thane, a smaller town and city.

The city's historical district, and the closest thing to a city centre, is an area that is still called South Bombay, which is filled with astounding examples of the distinct Indo-Saracenic architecture of The Raj. This mixed Victorian Gothic architecture with local Indian motifs and the most famous example is the gigantic Railway station formerly called Victoria Terminus, since renamed Chatrapati Shivaji Terminus and locally called either VT or CST. This area includes the Fort Area, featuring the enormous GPO Post Office, the Taj Mahal Hotel (not to be confused with the real Taj Mahal of course), the Gateway of India, Marine Drive featuring beautiful examples of Art Deco buildings. As a psychological space, the South can extend up to Mumbai-Central or Mahalaxmi (location of the iconic sea-side Temple) or as far to Sion Fort (which was built by the English to separate the English from the Portuguese side of the city). The disproportionate British influence stems from the fact that the Bombay Harbour is located here, making it the centre of British Trade in the Colonial era. As such the area features not only the head of the Municipal office (which is more well-funded than many Indian states) but also the Bombay Stock Exchange, the Bombay High Court, Bombay University and several other prominent institutions. Among local Mumbaikars it's often called "Town-side" and it signifies touristy-buildings, fancy hotels and restaurants, high street shopping and movie theatres(more so in the old days than now) and impossible-to-dream of affording residential buildings. Many Indians travel from across Maharashtra to work there daily, undertaking 2 or 3 hour train rides to-and-fro to arrive there. Likewise, middle-class families with aspirations would hope to send their kids to "Town colleges" such as St. Xavier's College or John Connon's School which has the same status in Mumbai as Ivy League Universities.

Since the 90s, when India underwent economic liberalization, the centre of gravity no longer tilts quite so heavily on the South (though it does have a huge impact still). The National Stock Exchange located at the business district of the Bandra-Kurla-Complex has taken away some of the work from the BSE, prominent educational centers are more evenly spread and on the whole businesses, citing the high rent (Nariman Point, the old business district in the south is the 15th Most Expensive in terms of office space in the world), are moving away from the South to the areas that were formerly on the outskirts of the city, the Western Suburbs (mostly around Andheri), Navi Mumbai(New Bombay) and the more recent business district of Bandra Kurla Complex (BKC) which has the National Stock Exchange located in 1992. As you can tell, Bombay/Mumbai has always been a Merchant City.

A more recent name of the city, notably the title of a 2004 book on the city by Mumbai-raised American writer Suketu Mehta, and one which certainly typifies what the city is really like to locals and how it appears to visitors. First-time visitors from smaller towns or cities with one-languages often mind the polyglot nature of Mumbai baffling — nobody's monolingual here and you will always find fellow migrants or people who somehow know the regional dialect where you come from. To tourists, there are the crowds — Mumbai has a population of 12.5 million and, outside of selected areas, it has very few public parks and spaces to accommodate its vast foot traffic. Agoraphobics and claustrophobics, ye be warned. The legendary local trains are a sight to behold with their many commuters, several of whom hang out of the open doorways and think nothing of charging to a train leaving a platform to reach work or school on time. It's also a city filled with heavy vehicle traffic. Changes to moderate this foot and vehicle traffic have come belatedly. These included overpasses (called flyovers locally), the suspension bridge called Worli Sealink over the Arabian Sea and a newly formed Metro Railway and Monorails that coming out of unplanned contingencies end up adding to the clutter of the old city landscape. It's a globalized city, with 62% residing in slums, with Urban Segregation mixed to such an extent that its common to find flophouses and tenement buildings in the shadow of a Palatial Residential area. Being a city formed out of several accidents and changes, it often feels like its being made up as it goes along.

The high level of corruption and bureaucracy leads to poor quality of roads and weak drainage that makes heavy rainfall in the city a trial every year. It ranges from torrential downpour to Biblical (as seen in the July 2007 floods) and it lasts four months of the year, and Mumbai is located on a coast with high tides. And then there are the very hot summers. People who live in Mumbai lead India in heart-related deaths. Then there's the ugly specter of Hindu-Muslim communal riots (which broke out in the early 90s and whose trauma is still keenly felt today), several instances of terrorist attacks (most recently the 2008 attacks on South Bombay). As such people who live here often have a sense of Everything Trying to Kill You. But God help you if you try and convince them to live anywhere else.