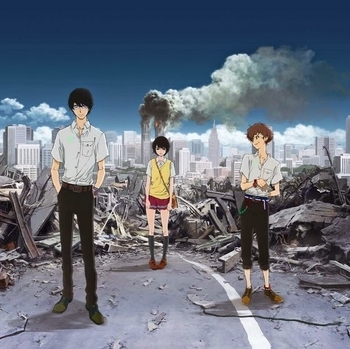 Pull the trigger on this world.
Advertisement:

Tokyo has been struck by a shocking terrorist attack, and the only hint to the identity of the culprit is a bizarre video uploaded to the Internet. The police, baffled by this cryptic clue, are powerless to stop the paranoia spreading across the population. While the world searches for a criminal mastermind to blame for this tragedy, two mysterious children — children who shouldn't even exist — masterfully carry out their heinous plan.

These two children are publicly known as Arata Kokonoe and Tōji Hisami, two ordinary roommates and new transfer students to their high school. On the day they carry out their plot, Shrinking Violet Lisa Mishima comes across it. When faced with either death or joining them, she chooses to become an accomplice in their efforts.

From Studio MAPPA, Terror in Resonance (Zankyou no Terror) is a Summer 2014 Anime directed by Shinichiro Watanabe with music composed by Yoko Kanno.

The show had a stage play that went from March 2-6, 2016 with Megumi Han and Mitsuaki Kanuka retained as Five and Mukasa.