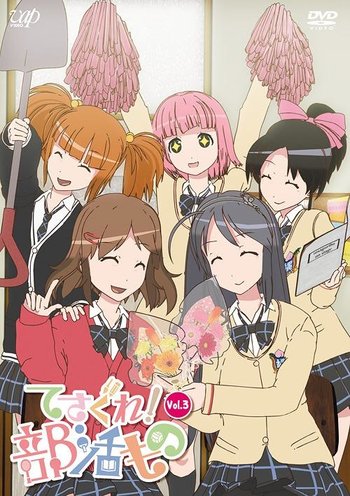 Stand Up!!!!note (Left to Right) Back row: Aoi Takahashi, Mobuko Sonota, and Koharu Tanaka. Front row: Yua Suzuki and Hina Satou
Now, the camera quickly pans up from the bottom and the title logo shows up with a thud!

Tesagure! Bukatsu-mono is a comedy anime that is themed around a group of high school girls trying to come up with a club that they would like to make and join together. Newcomer Koharu is introduced to the enthusiastic club president Yua, the calm vice-president Hina, and the energetic Aoi who are all members of the "Tesaguri (Groping) Club". Each episode is themed around a club subject (baseball, theater, rugby, etc.) where the girls try to come up with activities around that theme while discussing the tropes and stereotypes of those genres. With increasingly meta topics and a zany cast, the show was popular enough to gain two additional seasons. Fans have described the show as being an animated podcast or radio show.

Tesagure! Bukatsu-mono was the first season, which aired in 2013. The setting is Koharu’s first year at her new school. In real life, Tesagure! featured a lot of adlib by the voice actresses and was animated using MikuMikuDance and prescoringnote recording dialog before animating (an unusual animation technique for Japan).

Tesagure! Bukatsu-mono Encore was the second season that was suddenly greenlit for 2014. The season is a mostly similar take at the show with some Character Exaggeration and new topics, along with a side plot centered around Aoi.

Tesagure! Bukatsu-mono Spin-off Puru Purun Charm to Asobou was the third season that aired in 2015. This season keeps the adlib format, but is positioned as a "spin-off" of the anime and is a collaboration with the radio voice actresses from "Minarai Megami: Puru Purun Charm".

In addition to the anime, a manga about the club was produced. A radio show called "Tesagure! Radio-mono" was also made which featured the anime's cast using a similar format to the show. A mobile game called "Tesagure! Game-mono" launched in 2017 featuring minigames themed around the anime. The cast would also be featured in the 2015 game, Miracle Girls Festival.