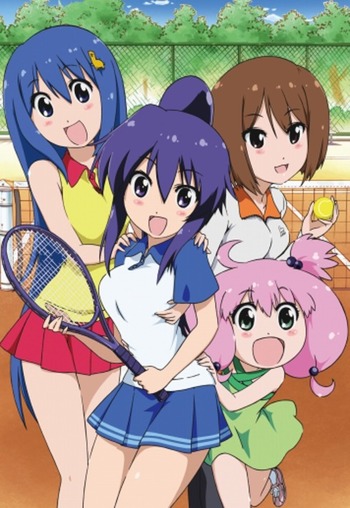 Teekyuu (てーきゅう — lit. "Tennis") is a Slice of Life sports comedy focusing on four precocious school students as they deal with the typical lifestyle of the average teenage high-schooler: Struggling through class, making new friends, being part of school activities, playing sports, cooking, stealing panties, digging up mummies in Egypt with their withered, senile grandmother, befriending an alien and going to their planet...

Teekyuu is the acid-induced love child of Earth Star Entertainment, creators of Encouragement of Climb. It was published in 2012 as a manga in Earth Star's self-published Comic Star Magazine, and was adapted the same year into a 2-minute, short format anime by Tokyo Metropolitan Station. Shin Itagaki not only directed the show, but also scripted, edited, storyboarded, and even composed music for it. The series is currently running

on Crunchyroll, currently at eight seasons consisting of twelve episodes each.note In the time it takes you to watch one episode of a standard-format anime series, you can watch an entire season of Teekyuu.

To be continued.
Next episode: Wikipedia With Senpai