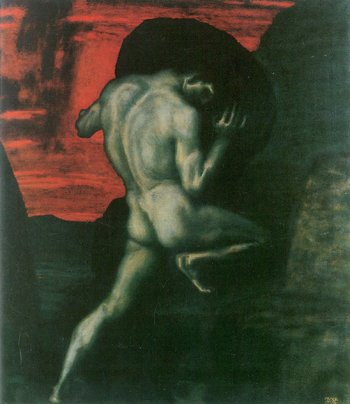 Sisyphus by Franz Stuck
Vladimir: Do you want a carrot?
Estragon: Is that all there is?
Vladimir: I might have some turnips.
Estragon: Give me a carrot. [Vladimir rummages in his pockets, takes out a turnip and gives it to Estragon, who takes a bite out of it] It's a turnip!
Vladimir: Oh pardon! I could have sworn it was a carrot.
— Waiting for Godot
Advertisement:

The absurdist movement is one of the most hilarious and depressing artistic and philosophical movements. After all the death and horror of World War I, people started realizing that the institutions and beliefs that they put their faith in — the government, the church, the military, technology, society, etc. — were not intrinsically right. The only reason they had any power or sway is because people let them have power and sway. In short, people started to believe that the foundations they had built their life upon had no foundations themselves. This led to the modernist movement.

The absurdism stage is considered part of the modernist movement; while it agreed that everything was pointless, it also saw the funny side to things. We go about our lives doing the most banal, bizarre things, even though when you really got down to it there wasn't a reason for them. We do things that are, in fact, Absurd. As a result, expect to hear lots of repetitive dialogue with no real point (see page quote).

There is a significant offshoot centered around absurdist plays known as the Theatre of the Absurd, a term coined by critic Martin Esslin. This was probably the closest thing to a true "school" of art that absurdism ever got, even though none of the playwrights would likely agree to the label.

It is important to make the distinction between Absurdism as the movement, the loosely related philosophy and general absurdist humor. Monty Python is well known for their absurdist sense of humor, but would not be considered Absurdists.

Absurdist philosophy is very closely related to Existentialism (and, by extension, characters that are The Anti-Nihilist). Compare and contrast Surrealism; both movements emerged in the wake of World War I and are stylistically similar, but whereas absurdism is all about embracing meaninglessness, surrealism is packed with meaning. See also Dada, which was an even more nihilist reaction to World War I. Compare Existential Horror, which plays this trope for, well, horror rather than comedy (though there can easily be overlap).

Alternative Title(s): Theatre Of The Absurd